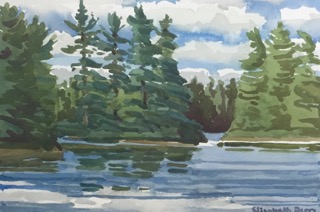 A Toronto-based visual artist, Elizabeth Berry divides her time between her Beach Studio, The Caribbean and Europe. From old houses and small shops of Toronto that she originally painted to hone her craft in watercolour, she expanded her sources of inspiration and nowadays visits Northern Ontario, South of England, the Caribbean and Europe.

In all these locales, it is a world of natural beauty, stability and tradition that she portrays. Expressed in vivid colours, flooded with sunlight, this happy universe is ideal as much as it is real. Most recently Elizabeth has travelled to fishing coves in New Brunswick and the Quebec villages of Charlevoix.

As a school girl, Elizabeth received encouragement from her mother for her drawings, but didn’t pursue a career in arts. She became a teacher and then a book editor. A part-time art course convinced her to immerse herself in art studies full time. The success was immediate.

Her first participation in the Toronto Outdoor Exhibition, in 1982, brought her the Toronto Archive Award for water colour; subsequent showings earned her the Best in Watercolour prizes in 1986 and 1987. One of her works was selected as the present to the mayor of Chongqing, China (former sister city of Toronto). Most recently Sonja, Queen of Norway has purchased 4 of Elizabeth’s watercolours from a Caribbean Gallery. Sir Bernard Ashley (Laura Ashley ) invited Elizabeth on board his private yacht and purchased two large watercolours

Posters International, Canada’s largest poster producer, discovered Elizabeth at the Toronto Outdoor Exhibition. The first 2 posters they produced sold over 20,000 copies in the first year. They went on to produce over 30 posters of Elizabeth’s paintings.

The following teachers at the Ontario College of Art had their influence:

Elizabeth’s work accomplishes several functions. As a chronicler, she records examples of traditional architecture in places she visits and also documents children on location by the schools and churches in the Caribbean. As an artist, Elizabeth promotes the idea of art in everyday life; she can be seen in remote places across her native Ontario, painting Northern landscapes, Georgian Bay and Muskoka Lakes, as her work has expanded in themes and interests. Elizabeth Berry embodies with ease the idea of a woman as a bona fide outdoor artist, with her portable easel, foldable table and a trademark umbrella.

Her works are found in corporate offices and private collections in Canada and world wide. She also donates her works for fundraising campaigns of several non-profit organizations such as Breakfast for Learning and the ALS Society of Canada. Elizabeth is a Toronto East General Hospital Citizen of Distinction and her prints and notecards are used by the hospital to thank their donors.

Elizabeth’s painting depicting the beauty of the Neville Lakefront contributed to stopping a 5 story condo development at the beach where she walks each morning. Her painting appeared in several major newspapers alongside the architectural drawing of the proposed condo. The Condo development was stopped at the OMB level thanks to the hard work of many of the local residents.